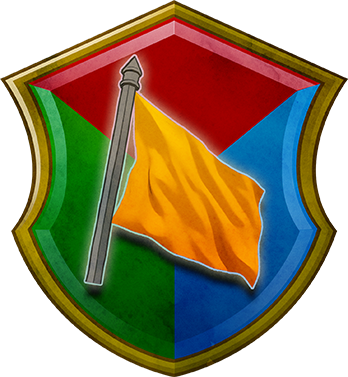 The game consists of 4 parts:

1. Select a base county

Players first select a Base Territory. Base territories cannot border one another and are each worth 1000 points.

Colors are randomly assigned to the players.

Players in turn select a neighboring territory, and occupy it if they correctly answer a Multiple Choice Question.

These territories are worth 200 points each.

This part consists of 6 rounds. For the sake of fairness, the order of play is different for every round:

In each round, the three players must answer a Guess Question.

In a Guess Question. the winner is the player who gives the closest answer to the correct answer.
If two or more answers are the same, the player who answered the fastest wins.

The winner may choose a territory to occupy. When selecting territories, players must first select new territories adjacent to their own. If there are no adjacent territories available, the player can occupy any of the free territories.

These territories are worth 300 points each.

This phase lasts until all free territories have been occupied.

This portion of the game consists of 6 rounds. Each player attacks once in each round. Only adjacent territories can be attacked. The Attacker and the Defender are asked the same Multiple Choice Question:

If the Defender wins by getting the right answer, s/he gets a 100-point Defense Bonus. This Defense Bonus cannot be won by defeating the player.

Attack on a Base Territory:

You may attack someone’s Base Territory if you have already occupied the territory immediately neighboring it.

In order to win the Battle, the Attacker must knock down all three Towers of the Castle in the Base Territory (Note: there are three Battles in an attack on a Castle).

If the Attacker loses, the attack ends, but the Attacker will not need to retake the Towers that have already been knocked down in subsequent rounds.

If a player’s Base Territory is occupied, that player is eliminated from the game, while the Attacker gets all of that player’s territories and points, which includes the point total equivalent to the value of those territories and the loser's Defense Bonuses.

Eliminating a Base Territory from the game is worth 1,000 points. Attacking an already demolished castle is also worth 1000 points.

You can rebuild your knocked down Towers by clicking on your own Base Territory and correctly answering a Multiple Choice Question.

If you answer the Question correctly, all of your Castle's Towers will be rebuilt. You must have at least one standing Tower in order to rebuild the other two.

The Battle portion of the game consists of 6 rounds. For the sake of fairness, the order of play is different for each round. The winner is the player with the most points at the end.