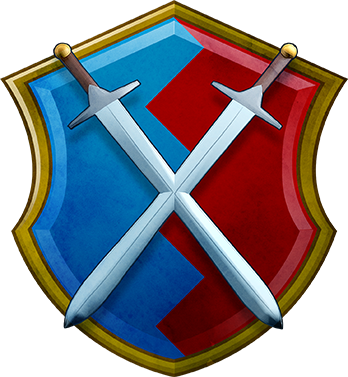 Triviador Duel is an exciting trivia, strategy game among two players. The goal of the game is to answer trivia questions correctly to be able to conquer as many territories as you can to win the battle.

The game consists of 3 parts:

There are two players in every game, marked with red and blue color.

The game map is chosed randomly during the draw (while the players wait for their opponent).

Currently, there are 17 different maps in the game. Most of these have 15 territories, but some of these divided into 19 territories.

In this phase the players compete for the remaining empty territories (there can be 13 or 17 empty territories). This round consists of 3 rounds. Each round begins with a Guess Question for all 2 players. The answer to these questions is always a positive whole number. The winner is the player who enters the answer closest to the right one.

If two answers are the correct, or are equidistant from the correct one, the player with the fastest answer is considered the winner.

Players may only choose free territories that border their own empire. If there are none of those left, then the player may choose any free territory. Players get 200 points for every territory they take.

The order of the chosing is the following:

*The order of the players:

The Battle consists of 4 rounds. From this point on, players try to conquer territories from one another. Players take turns attacking.

The Attacker and the Defender are asked the same Multiple Choice Question:

If the Attacker wins, s/he gets the contested territory, while the Defender has the territory’s value deducted from her/his score. The Attacker gets 400 points.

From this point on, that will be the value of this territory. The Defender gets a Defense Bonus of 100 points if s/he wins by answering the first question correctly.

The order of attacks is the following:

Attacker can attack only adjacent territories. In the 4th round every territory can be attacked.

When attacking a Base Territory, the Attacker must knock down all 3 Castle Towers on that territory. If the Attacker wins the Battle, one Tower falls and the Battle continues for the Towers that are still standing. As soon as the Attacker loses, the attack ends.

If the Attacker knocks down the last Tower, s/he gets all of the Defender’s points and territories, and the game is over. When the Base Territory is attacked, the Towers that have already fallen do not need to be attacked again.

A draw is not possible because, if the players have the same amount of points at the end of the game, the final result will be decided with a Guess Question.