Alliance - Rules of the Game 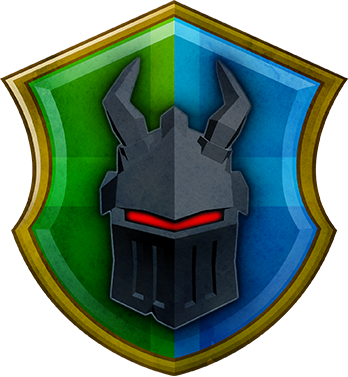 Triviador: Alliance is a two-player strategy quiz game. The object of the game is to defeat the Dark Lord's Empire with your ally.

In order to win, you must answer multiple-choice questions correctly, and, with the right strategy, conquer as many territories as possible, or destroy the Dark Lord's Castle.

If all of your Castle's Towers are destroyed by the Dark Lord, the game is over. Since this is a cooperative game, you can only win if you both players "survive" the attacks. Think carefully about your strategy!

In the game, your player color is always blue. Your ally is always green, while the Dark Lord is black.

The game takes place on a fantasy map divided into 19 territories.

The game consists of 3 main stages:

Each player gets a Base Territory, including the Dark Lord The bases are not adjacent to each other and are marked with a Castle with 3 Towers.

Each castle is worth 400 points.

The remaining 16 areas must be occupied during this stage. This section consists of 6 rounds. The Dark Lord begins each round, followed by you and and then your ally - alternately choosing a territory The last territory, 19, always goes to the Dark Lord.

Due to the territories occupied, you will begin the battle with 2,800 points:

You do NOT have to answer questions during this stage.

The Battle stage consists of up to 10 rounds. You and your green ally can only attack the Dark Lord's territories. You and your ally take turns choosing which black territory to attack each round.

You can attack the Dark Lord's Castle immediately if you occupy any territory adjacent to the black Castle. This means you can potentially destroy two towers as early as the first round.

After selecting a territory you will have to answer a multiple choice question. You and your ally will answer the question at the same time, but you will only see your question (NOT your ally's). The Dark Lord does not answer questions. The number of territories he can occupy in one round depends solely on whether you and your ally answer correctly or incorrectly.

If you answer the question correctly, you will occupy the selected territory. If your Ally responds correctly, s/he will also receive the territory s/he has attacked. So you can occupy two territories in a single round.

The Dark Lord can attack in the following way:

If you answer a question incorrectly, and the Dark Lord occupies your, or your ally's territory, it will become black.

The Battle can end in five ways: